I have been propelled into the fascinating world of pig production by an investigation into the origins of the Kolbroek and the Kune Kune, two pig breeds respectively from South Africa and New Zealand.  In this article, I look at the well-known English breeds – what the English pig looked like before they were crossed with Chinese, the result of crossing and some of the characteristics of good sows and boars.

Harris has a great sketch of an old English and old Irish pig.

Early breeders did not immediately find a market for the improved breeds which was done between old English sows with Chinese boars.  From the offspring of these animals, the farmer will then select the ones with the character traits that are most desirable and the rest will become ham or bacon.

There were many common village pigs that were crossed with Chinese pigs.  One wealthy landowner would buy the Chinese boar and “rent” him out to villagers to fertalise their sows.  In this way, pigs from a village or a county developed similar characteristics.

The best known English breed at the time was the Berkshire.  One of the other well-known breeds is the White’s.

Or Large Yorkshire Pig, as it used to be called.

Or Small Black, or Essex as it is called in the USA.

It is said that businessmen drove the development of the Berkshire as opposed to lovers of pigs and pig breeds.  Agents of wealthy businessmen in the US bought the animals based on their ability to do well at shows and not for any inherent functionally beneficial characteristics.  The buyers were looking for pigs that are short, turned up snout, a heavy jowl, thick neck, wide shoulders, and a fat back.

One of the oldest of the English pigs.  Extensively bred in Leicestershire, Staffordshire, and Northhamptonshire and in some of the adjacent counties.  It is native to the midland counties where there are lots of oak tree forests.  They were driven into the forests for autumn and early winter.  When the forests were closed off and converted to arable land, farmers opted for a quieter pig variety and one that fattens more readily. (Sinclair, 1879)

The change was accomplished by crossing long-snouted, prick-eared sandy and gry with black spots pigs with pigs having a strong infusion of Neapolitan blood.  Many also used the white pig.  Bakewell did, through inbreeding and selection accomplished in both breeds a more delicate disposition and an animal that is more easily fattened.  He termed the white Berkshire breed.  (Sinclair, 1879)

The result of the mixture was a plum-pudding or the black, white and sandy pig.  In certain districts of Staffordshire and adjoining counties, the breeders of these mahogany coloured pigs took considerable pain by selection to increase the feeding properties of their pigs without losing their distinctive colour. (Sinclair, 1879)

The pigs were not particularly quick feeders but they were prolific and when well fattened, furnished a splendid carcass of pork nicely intermixed with lean.  (Sinclair, 1879)

They were later crossed with pigs that render them more suitable for bacon production.

The following pure breeds were acknowledged in England at this time.

Development of the New Engish Breeds

There is a great example of the development from the Old to the New English Breeds that is a cross between English Sows and Chinese Boars.  In Loudon’s Encyclopedia of Agriculture are a set of engravings that gives us a glimpse of what the transition would have been like.  The first edition appeared in 1825.

Compare it with the following English Breeds.

Loudon refers to the Berkshire as a “small breed” which was probably the first character quality to achieve better fattening and maturing quality (i.e., reducing the size of the animal improves its ability to gain weight and mature).

As a note of interest, compare the Berkshire sow above with the Kolbroek and the Kune Kune.  The biggest difference is the face and snout.  This looks more like the Middle White.

Nevertheless, the sow above shows the effect of crossing the Berkshire with a Chinese pig and better feeding.  The effects of persistent improvements on these crossed animals can be seen from the two pictures below, figure 20 and 21 from Harris.

Compare these with the picture of the old English pigs given right at the top of the article. Also compare it with this drawing of a Chinese Sow, given by Harris.

Boars of the improved Berkshire-Chinese cross, after the breed has been established were used to cross with the large old Berkshire sows.  This was considered a less violent cross and was more beneficial than the direct use of pure Chinese pigs.

I wondered how one would approach it if you desire to create a certain look or particular qualities in a pig.  Which one would have the biggest influence on what? The boar or the sow?

Selection of a Boar – a few pointers

The boar exercise the greatest influence on the “external points of the joint produce”, then does the sow.  In the question I asked above, one will then select the boar by looking at its outer characteristics in the first place.  What is the outward “look” that you desire in your animal?  The sow is said to influences the internal portions to a far greater degree.

Other good pointers to look for in a boar is its sexual organs.  These must be well developed is an indication of vigour.  The quality that you do not want in a boar is a vicious and bad temperament.  Also, select a boar that was part of a large litter.  A large boar should not be preferred to a small one as large boars seldom last long. (Sinclair, 18970)

Selecting a Sow – a few pointers

A few comments about a sow to give us an incling of the different functions of a boar and sow in creating a particular pig.  The sow is responsible to furnish her offspring with the internal arrangements to enable the complete animal to readily convert its food so that the pig grows rapidly, fattens quickly and proves itself a profitable hog.

Some breeds produce what is sometimes called a big roomy sow.  They are “flat-sided; their loins are “weak”.  They are often admired by people who know nothing about breeding pigs.  These poor animals have difficulty getting up once they lie down.  An evenly-made compact sow with quarters long, wide and deep, and on short legs will rear far more pigs and at much less cost than will one of the large kind.

The particular points one is looking for in a sow are similar to what you will look for in a boar.  Particularly its temperament which must be gentle.

A well-formed udder is of the greatest importance and she should have no fewer than 12 teats.  15 is better!  They should be spaced evenly.

It is interesting, working through the English breeds, to identify a few who are close in characteristics from the Kune Kune and the Kolbroek.  The Middle White is a good case in point.  Apart from its colour, there are a number of features in common.

Similarly, the old Berkshire should not be completely discounted as it too shares many characteristics with the Kune Kune and the Kolbroek.  The colour, spits, ears, face, and body – to mention a few.

The main habitat of earthworms is the earth. Commonly found feasting on interesting living or dead matter. These are unusual and untold stories from the world of food science from the present and ages past.

– Inside our blog: Bacon & the Art of Living

The story of the creation of bacon.  Read it inside our blog at:  Bacon & the Art of Living

My fellow explorar, Minette and me.

– Inside our Blog: Best Bacon System on Earth

We developed a bacon grid system with custom designed processing aids which is rated the Best Bacon System in the World.  It is in use in New Zealand and in South Africa.  My son, Triatan sells the system through his company GMT.  His whatsapp number is +27 727428793 or email him on tristanavt@gmail.com See a detailed discussion on the system at: Best Bacon System on Earth Have a look at the videos below which showcases many features of the system. 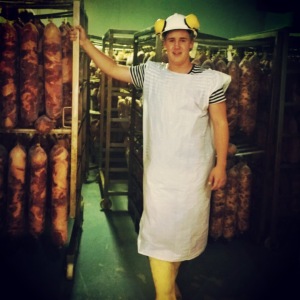 The Best Bacon System on Earth – Loading the grids 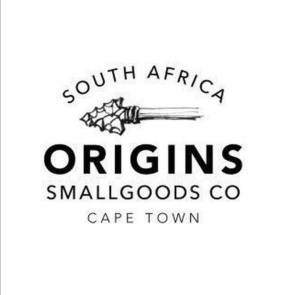 Origins is designed to bring exquisite artisan products to life.  Some of our creations are featured below.  Most are photos of the work of curing experts from around the globe.  These products are being made available to South Africans.

Inside the blog, it is featured here:  Origins Smallgoods Co, Cape Town

– Inside our Blog: Pic’s history of meat processing

As an ongoing project, I am building up a collection of old meat processing pictures.  View it inside the blog at: Pic’s History of Meat processing