Since the start of the project I have been searching for the location of Combrinck & Co’s butchery.  The butchery moved several times due to expropriation and one time as a result of a request from the Chamber of Commerce, the Fruit Growers Association and several members of parliament.  I was aware that most of the sites no longer exist.  I wondered if I could find any of the old sites.

Jacobus’ ancestors immigrated to Cape Town from Germany in 1717. His grandfather was an architect in Stellenbosch, Herman Combrinck. His father, Petrus Arnoldus Combrinck was a missionary and schoolmaster in Paarl.

He started work at Mechau’s butchery in 1839. Mechau gave Jacobus a thorough introduction into the meat trade and after his apprenticeship he was appointed as foreman of the business of Othmard Bernard Schietlin. Schietlin was the leading butcher in Cape Town who eventually returned to Switzerland. (Dommisse, E. 2011:25)

In 1857 Jacobus entered into a partnership with Henry John William Ross. Combrinck & Ross developed into a successful butchery. Their clients included households, the British Navy and Army and several state departments. (Dommisse, E. 2011:25)

THE SITE AT SHAMBLES – ADDERLEY STREET

The business was situated at the Shambles.  There was a row of thatched-roof shops and enclosed behind them was where the livestock was brought into from the country to be slaughtered.  The Shambles were erected in 1820 as the only official area where animals could be slaughtered.  Conditions at the Shambles were poor, located in Adderley Street.  No proper drainage existed and no rubbish removal.  Extremely unpleasant condition existed.  (Simons, PB, 2000: 11, 13 and Dommisse, E. 2011:38)

The location was at the  lower extension of Strand Street, cramped between the sea front and the Grand Parade.  (Simons, PB, 2000: 11)

The site obviously no longer exists.  There is no point trying find any more than the general area where the Shambles were located.

THE STRAND STREET SITE (SHAMBLES NOS 3, 4, 5 NEAR THE CUSTOMS HOUSE)

In 1883 the city decided to demolish the old abattoir in Adderley Street and was ordered to establish its own abattoir.  It was labeled as a “public disturbance.”  The head office of Combrinck & Company moved to Strand Street.  (Dommisse, E. 2011:35)

It was in Stand Street where Combrinck & Co erected refrigeration chambers for the first time and they were given the chance to install their own slaughtering equipment.  (Dommisse, E. 2011:39)

Like the first Shambles site, this obviously also no longer exists.

In the early 1890’s the city wanted to extend the train station to cope with increased demand.  On the one side of the  train station was the Castle of Good Hope and on the other side, the seafront.  The only possible way of expansion was towards the area where the Shambles (the abattoir)  were situated.  (Simons, PB, 2000:31)

The Graaff brothers and the authorities locked horns over the issue of a new location for Combrinck & Co and compensation for the loss of their old site.

By April 1893, they were in the final stage of negotiating new refrigeration equipment for the expansion of their business and were given only days to conclude the deal.  Combrinck & Co gave the commissioner of Crown Lands formal notice that the government would be held liable for any loss as a result of their failure to conclude the deal.  (Simons, PB, 2000:31)

The government responded by giving Combrinck & Co formal notice that they will press on with expropriation. (Simons, PB, 2000:31)

“In a leap of faith that all would be well in the end, Combrinck & Co purchased a site fronting New Market Street, around the corner from their old premises, and made plans for the immediate erection of their new refrigeration plant and machinery.”  The Newmarket site were in use from 1894 until the Dock Road property was commissioned five years later.(Simons, PB, 2000:31, 36)

I knew that this site may still exist, but I wondered if I would be able to locate it.

A court case followed where the government challenged the decision to award such a big amount.  The case was heard on 9 March 1895.  The court decided that “the amount is certainly large, but there is no allegation of partiality or misconduct on the part of the arbitrators.”  The court found in favour of Combrinck & Co with cost. (Simons, PB, 2000:36)

It is this site that I may have located on 26 October, 2014.  For the sake of completing the chronology, here is the rest of the story.

A year before the arbitration and court case Combrinck & Co was in negotiation with the Cape Chamber of Commerce and the Fruit Growers Association as well as several members of parliament.  Combrinck & Co was approached to consider the possibility of providing cold storage in Cape Town for deciduous fruit awaiting shipment to Europe. (Simons, PB, 2000:37 -41)

The only problem was that the fruit farmers were concerned that the new plant in Newmarket Street is to far from the harbour.  The problem was that by this time, the contractors had already completed several large refrigeration chambers. (Simons, PB, 2000:37 -41)

Combrinck & Co. was however prepared to relocate their entire plan to a more suitable location.  A new site was identified in Dock Road and would involve reclaiming land from the sea. (Simons, PB, 2000:37 -41)

BACK TO THE SEARCH

I have only been able to locate the new Dock Road building and found it after Carl from Capeinfo mailed me directions.  He wrote, “The only property we can help you with is the ICS building.  It’s the three-story near the entrance to the Waterfront between the Waterfront Sun Hotel (previously Holiday Inn) and the new blue skyscraper which has just been completed.  It has a liquor store on one end and a Col Caccio on the other.” 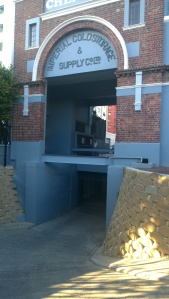 I have looked for another Combrinck & Co site many times throughout the Woodstock area, but came up with nothing.  I decided to change tactics.  What has worked for me in the past when I look for something that I cant get information on was to start digging for contemporaries.

Such a contemporary and very interesting person in his own right is Sir John Woodhead.  Sir John is so interesting that he became the subject of an inquiry on it’s own.

I met  Richard Harris, the current owner of Woodhead’s.  Woodheads was started as a leather and general merchant company by Sir John Woodhead in 1867.  Woodheads today still produce and sell exquisite leather works and he gave me the previous location of Woodhead’s.  Behind the Caltex Garage opposite the Good Hope Center.

I found the Caltex garage that Richard spoke about, drove a little bit up Sir Lowry Street.  Sir Lowry street runs parallel to Newmarket Street with less than 100m seperating them.  I  parked my car.  It was quite.  Nobody else was on the street.  The reason why I went up Sir Lowry Street was due to the proximity to the Woodheads site and the fact that I have been up Newmarket Street many times and there is no site that even remotely looks like a place where a butchery used to be situated.

I walked no more than 5 meters when a man, leaning out of the first story window greeted me.  “What are you looking for?”

I asked him if he knows anything about an old butchery that used to be in the area.  He pointed down and said to me:  “The old butchery of Combrinck was downstairs and later it belonged to the Imperial Cold Storage & Supply Company.  Cold rooms were erected in the back.”

I could hardly believe my ears.

He invited me upstairs and offered to show me the building. I met his wife, son, and daughter and after a great cup of coffee, we set off for a tour of the premises. 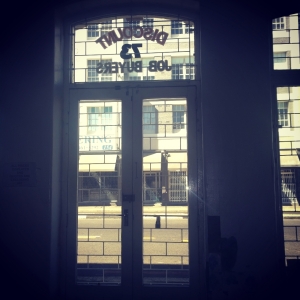 It is without question a butchery who was situated there.  Exquisite tiles are visible underneath a coat of paint.  Marble slabs used to be in the window sills.  Marble was used extensively in butcheries due to the inherent cold temperature and the smooth, hard surface which made for easy cleaning.  The floor is that of an old butchery.  It is similar to many other old butchery floors I have seen with lines where drainage channels used to run. In the back was the pickling room and of course, the refrigeration would have been in the back.

The reason why I think this is the site are the following:

a.  The current occupant verifies that this is the correct site.  The history is not known except to a very small group of people.  There is no reason to make the claim if it was not the Combrinck & Co’s site.

b.  The owner/ occupants are very likely to know the history since real estate agents will be sure to mention information like this in an attempt to sell/ rent the premises.  It is also something that they asre not likely to claim if it is true since the general story about Combrinck & Co is not widely known.

c.  The location is a perfect fit with where the site is described to be despite the fact that it is at least 50m removed from the actual street where it should be located.  It is literally around the corner from the previous abattoir site in Strand Street where the railway station has been expanded, exactly as both Ebbe Dommisse and Phillida Brookse Simons describe in in their books.

d.  The building fits the characteristics of a butchery inside.  The flooring, the tiles on the wall and the use of marble.

e.  In the back of the building is ample space for the old refrigeration equipment.

I will verify everything by locating the title deed and visiting the Cape Town archives.  Besides the deed of the exact site, it will be interesting to see the deeds of the two properties directly behind it with the 3rd facing Newmarket street.

The second interesting bit of information that Mr Osman gave me is to give me three suggested sites for Combrinck’s house in Woodstock, based on the description I gave him of the house.

On Sunday, 2 November 2014, Minette and I drove out to get get the GPS coordinates for my brother, Elmar, who is with Seeff properties and who used to be a lawyer.  He graciously offered to get us the original title deed of the properties in question.

We bumped into Osman and his wife outside the presumed Combrinck & Co site.  He drove us to the two most likely properties in Woodstock. I sent Elmar the GPS coordinates.  Now its a matter of wait and see.

“Bacon & the art of living” in book form

Bacon and the art of living

Promote your Page too